Several plumage types are found in feral pigeons (Columba livia), but one type imparts a clear survival advantage during attacks by the swiftest of all predators - the peregrine falcon (Falco peregrinus)1, 2. Here we use quantitative field observations and experiments to demonstrate both the selective nature of the falcon's choice of prey and the effect of plumage coloration on the survival of feral pigeons. This plumage colour is an independently heritable trait3 that is likely to be an antipredator adaptation against high-speed attacks in open air space.

The polymorphic feral pigeon is ideal for investigating the effects of different plumage combinations on predator success. One plumage phenotype - known as the 'wild' variant - is blue-grey but has a white rump between the base of the tail and the lower back, closely resembling the feral pigeon's rock-dove ancestor3'4 (Fig. 1); all other plumage types lack this contrasting rump patch3. We tested whether the wild coloration might impart a selective advantage over other plumage types during high-speed diving attacks by falcons, which often exceed 157m s (ref.25 Fig. 1a).

During a seven-year period, we recorded 1,485 attacks by five adult peregrine falcons on free-ranging flocks of feral pigeons in Davis, California, during their daily linear commute, and an additional 309 attacks when three of these falcons were juveniles. For each attack, we noted the plumage phenotype of the selected pigeon and whether the stoop led to a successful capture (for methods, see supplementary information).

To determine the natural distribution of plumage phenotypes, we banded and recorded data from 5,235 pigeons in the study area. Adult falcons selected plumage phenotypes for attack in the same relative proportions that occurred naturally (Fig. la, inset), except for the wild phenotype (P =0.006). Juvenile falcons, however, attacked all plumage phenotypes in proportion to their frequency in the population.

Comparison of adult and juvenile falcons revealed a significant difference in the plumage phenotypes they selected as prey (F[5,1782] =2.129, P=0.05; Fig. 1b). But there was no difference between adults and juveniles in their captured pigeons' pattern of plumage (F [5,585] = 0.39, P= 0.85; Fig. 1b), suggesting that both age classes learn to avoid the wild plumage during attacks.

To confirm the advantage afforded by a white rump to pigeons during a high-speed attack, we captured 756 wild and blue-bar red pigeons and switched their rump-patch feathers. We then released these pigeons and monitored predation by three adult peregrine falcons. After plumage transfer, we found that capture rates were reversed (Fig. 1c). The original wild phenotype now suffered predation at the same rate as the unmanipulated blue-barred type, whereas the manipulated blue-barred type now had rates of predation as low as the unmanipulated wild type (P < 0.0001). This indicates that the dorsal white rump patch is important for the survival of feral pigeons during attacks by peregrine falcons.

All feral pigeons perform the same evasive roll during predation by falcons (Fig. 1a). The protective white patch may disguise the initiation of the pigeon's evasive roll by contrasting conspicuous (white patch) and cryptic targets (grey wings and body)5. A fast-flying falcon primed to a conspicuous target centered on the roll might fail to detect the dodge initiated by the cryptic wings as the predator closes from behind. When pursued by predators, schools of fish in open water and many shorebirds also display their dark dorsal and light ventral surfaces in a display that alternates between a cryptic and a conspicuous signal6 9. The use of contrasting patterns as an antipredator mechanism is widespread and may represent a case of convergent evolution.

Given such a selective advantage, why is the wild phenotype not better represented in flocks of feral pigeons? Unlike their monomorphic ancestor, the rock dove, feral pigeons often choose mates with plumage unlike their own (negative assortative mating), and this maintains plumage polymorphisms3. Also, the conspicuous white rump patch could prove disadvantageous when the bird is near cover, such as trees, or confronted by other predators, particularly accipiters and falcons that typically chase down their prey at lower speeds.

In the eastern part of the pigeon's native range in Eurasia, C. livia is sympatric with a subgenus of falcons, Hierfalco, that typically chase their prey in level flight. Pigeons from this region lack the white rump patch1,4. The decline in recent decades of peregrine-falcon populations worldwide relaxed their selective pressure on feral pigeons, but this has now reversed, with falcons recolonizing many of their former haunts10. Over the study period, the proportion of wild plumage types in our study population increased significantly relative to blue-barred types (P = 0.01), in parallel with a steady increase in predation by peregrine falcons. This suggests that, although pigeon plumage polymorphism persists, falcon predation pressure can lead to an increase in the relative proportion of the wild pigeon phenotype. 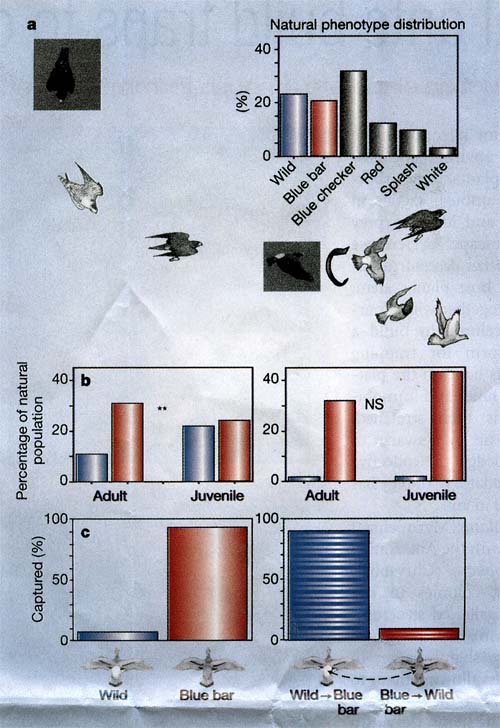 a, Sequence of attack by a falcon as it closes on a pigeon: from the bottom of its dive (top left), the falcon arcs behind the pigeon to begin its 20-100-m horizontal approach; the pigeon then takes avoiding action by dipping one wing, rapidly rotat-ing (arrow), and rolling out of the path of the falcon. Inset, natural distribution of the six pigeon plumage phenotypes in the study population (n= 5,235).
b, Percentage of wild-coloured (shown in blue) and blue-barred (shown in red) pigeons selected for attack (left panel) and actually captured (right panel) from the natural population by adult and juvenile falcons. (Statistics indicate comparison of all phenotypes.)
c, Percentage of wild-coloured (white rump) and blue-barred pigeons captured in the natural population (left panel; n=203) and after plumage transfer (right panel; n= 69) in a field experiment.